Are you searching sweet bengal baby??? 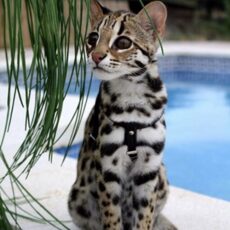 The Bengal cat breed originated from the crossing of the wild Asian Leopard Cat (Prionailurus bengalensis) and Indian and Egyptian Maus.  The resulting feline exhibits the "wild" characteristics of the Asian Leopard -spots & rosettes on the top coat, white underbelly with spots, and an athletic body structure.  Although the Bengal cat has a desirable "wild" appearance, it has a gentle domestic cat temperament. The Bengal is a domestic cat breed developed to look like exotic jungle cats such as leopards, ocelots, margays and clouded leopards.

They were developed by various people, most notably Jean Sugden Mill, in the 1970s and 80s with the aim of harnessing the beauty of the wild cat, yet maintaining the temperament of the domestic cat. Through careful breeding, this aim has definitely been achieved!

Jean successfully got the Bengal cat recognized by The International Cat Association (TICA), in 1983. Jean was developing the breed, and continued it past the first generation hybrids. She pushed fellow breeders to breed these hybrids further generations down, register them with TICA, and establish the Bengal as a domestic breed.

But the look of the glittering coat of the Bengal that we all love wasn’t brought about until Millwood Tory was added in the early 1980’s to the Millwood Bengal breeding program. Tory, a domestic street cat, was imported from India because of his rich coloring. Tory was bred to add this into the breed, giving the breed the glittery coat that it is famous for.

Jean’s plan wasn’t for the Bengal to remain a hybrid, but a domestic cat. It was shown across oceans which brought a large amount of public attention. A significant amount of this attention was brought by showing Millwood Penny Ante, an F2 Bengal, who was a friendly and relaxed cat that looked like a little leopard. She was even used to advertise shows from the East Coast of the United States all the way to Europe.

Menu
Did you like our kittens? Please leave your name and contact information and we will get back to you
L’indirizzo:
Italy,Rome
00060
Telefono:
+393923722842